The microwave auditory effect (also known as the Frey effect or the microwave hearing effect) is perceived as a "buzz, clicking, hiss, or knocking" originating "within, or immediately behind, the head". While its mechanism is not entirely understood, the prevailing theory is that pulsed microwaves become absorbed by tissue in the skull creating a thermoelastic wave sensed by the inner ear. Sources cite the first anecdotal accounts as occurring during World War II by personnel working in close proximity to radar equipment. A subsequent discovery occurred in 1947 by radar technicians at Airborne Instruments Laboratory and is described in the article "An Observation on the Detection by the Ear of Microwave Signals".

Research in the United States began with the work of Allan Frey whose seminal publications "Auditory system response to radio frequency energy. Technical note." (1961) and "Human auditory systems response to modulated electromagnetic energy" (1962) were the first to investigate the effect. Frey used transmitters which were "pulse modulated with no information placed on the signal". By varying transmitter parameters such as pulse width, peak power density and pulse repetition rate he was able to induce auditory sensations in the frequency range 5kHz and higher. 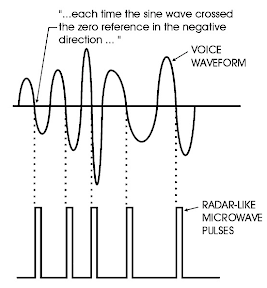 In the early 1970s Joseph Sharp and Mark Grove at the Walter Reed Army Institute of Research took Frey's work one step further by successfully transmitting speech using pulsed microwaves as described in the 1975 article "Microwaves and Behavior" and in the 1978 text "Microwave Auditory Effects and Applications" by James C. Lin. The image to the left shows the modulation scheme used by Sharp and Grove.

The first patent for microwave hearing communication was filed on December 19, 1983 by Philip Stocklin of Satellite Beach, FL ("Hearing Device"). No follow-up information is available on the efficacy of this device other than that Stocklin's theory has been discredited in favor of the thermoelastic mechanism. The second patent by a private entity was filed in 1988 ("Hearing System") which claims a novel application of signal bursts to create intelligible communication.

It wasn't until 1996 that the US Air Force filed patent "Method and device for implementing the radio frequency hearing effect" which was accepted in 2002 and subsequently modified as "Apparatus for audibly communicating speech using the radio frequency hearing effect". The objects of this invention include the intelligible encoding of speech, the intelligible demodulation of encoded speech by the microwave hearing effect and to "permit a message to be identified and understood as speech when a listener does not know beforehand that the message is speech". There has been reported successful demonstration of this patent using the double sideband balanced modulator approach.

Some military applications of this technology are shown in the following unclassified and declassified documents:

It would also appear possible to create high fidelity speech in the human body, raising the possibility of covert suggestion and psychological direction... it may be possible to "talk" to selected adversaries in a fashion that would be most disturbing to them.

A decoy and deception concept presently being considered is to remotely create the perception of noise in the heads of personnel by exposing them to low power, pulsed microwaves.

Application of the microwave hearing technology could facilitate a private message transmission. It may be useful to provide a disruptive condition to a person not aware of the technology. Not only might it be disruptive to the sense of hearing, it could be psychologically devastating if one suddenly heard 'voices within one's head.'

voice to skull devices - Nonlethal weapon which includes (1) a neuro-electromagnetic device which uses microwave transmission of sound into the skull of persons or animals by way of pulse-modulated microwave radiation...The sound modulation may be voice or audio subliminal messages.

Another application of the microwave hearing effect is to temporarily incapacitate an individual by creating a strong sensation of sound in the head. The non-lethal weapon MEDUSA utilizes this effect. A similar application has been proposed for birds in the path of airplanes.

A final note is the operational distance of the microwave transmitter. The "Bioeffects of Selected Nonlethal Weapons" study states:

Microwave energy can be applied at a distance, and the appropriate technology can be adapted from existing radar units. Aiming devices likewise are available but for special circumstances which require extreme specificity, there may be a need for additional development. Extreme directional specificity would be required to transmit a message to a single hostage surrounded by his captors. Signals can be transmitted long distances (hundreds of meters) using current technology. Longer distances and more sophisticated signal types will require more bulky equipment

So given the right technology it may be possible for a highly directional microwave transmitter mounted on a low Earth orbit satellite to transmit messages to an individual person using the microwave hearing effect.

The following is a video and a list of articles from the popular media on microwave hearing: